In Memory of Mary Lappala 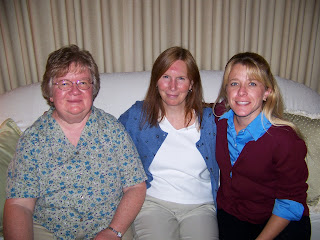 I lost a dear friend tonight to melonoma of the lung...the worst possible cancer there is. Mary Lappala. She was among my best buddies during the 4 years I lived in Michigan...we had an unlikely friendship, as she was old enough to be my mother. She never married. She did confide that she would have liked to...however I never sensed any discontentment in her singleness. Not long after we first met in church, I discovered how like-minded we were in faith and the doctrines of grace so that is probably why we enjoyed fellowshipping together. We were both single and did not have a whole lot of like-minded singles in town..

Mary and I were both part of Cornerstone Community Church in Escanaba, MI. While most churches today seem to ignore singles, and sometimes setup singles groups for purposes seemingly nothing more than to acknowledge their existence or to simply keep them out of the way. However, Mary and I agreed that Cornerstone being the small church it was, was like a strong unified family and made us both feel valued for the ministry.

But knowing the need of individual families to have their own times, Mary and I sometimes hung out, looking out for each other's needs such as rides, food items, or a simple phone conversation...sometimes going out to eat on a Sunday afternoon..often being joined by other friends of hers such as Barb Waterman, or a couple of other widowed ladies in town...I guess I could have been labeled the ladies man...though I was easily 10-20 years younger than all of them!

But I admired Mary the most out of all of them, especially for her hunger for the Word.. In fact, she was a Grace To You subscriber, and she had checked out Cornerstone, not having any idea of our connection to Grace Community Church. So when she realized this, she was there to stay, and behold, became part of our family. As she soaked up the Word of God in the teachings and her faithful studies alone, she imparted what she learned to the children and served the saints in other ways. She was surrogate grandma to the Woodward kids while they lived there. She was a favorite aunt to her siblings' children and grandchildren..in fact , it looked to me that her nephew Todd's children were almost like her own grandchildren she never had. Mary also was the spiritual advisor to most of her female peers and an example of what a godly woman is to be. She was also a great example and encouragement to me. She work heartily unto the Lord at her various positions as school teacher and medical field employee.

Mary's retirement was largely spent in cancer treatment. When I first heard of her melonoma, I personally thought it was a death sentence, but she pursued treatment with such great hope which was contagious. I would call her often, intending to minister and encourage her, only to have received this enocouragement from her. Finally, a short time ago, the doctors informed her that they did all they could do. She accepted the news with the gratefulness to God for the life she lived and anticipation of the Heaven that she was about to enter. What a tribute her life has been. While I miss this dear Sister, I rejoice that her homegoing was peaceful, and glorious. I along with others will always treasure our days together with Mary here on earth, and I long to enjoy the eternal fellowship with Christ that she is are now experiencing. In memory of our friend Mary Lynne Lappala--our dear loved one.
" Precious in the sight of the Lord is the death of His godly ones." Psalm 116:15
"I'll love Thee in life, I will love Thee in death,
And praise Thee as long as Thou lendest me breath;
And say when the death-dew lies cold on my brow,
If ever I loved Thee, my Jesus, 'tis now."
<-- A verse taken out of the hymn "My Jesus I Love Thee" by William Featherston...a hymn loved by Mary
Posted by CPLawson at 8:42 PM

What a lovely memorium to Mary! I am so glad she had a friend like you. Mary was always so gentle and quiet in school but always had a smile and had a sense of humor she shared with us. Sounds like you were her angel and now she is yours! Mary was one of my "little cousins" as they say in Finland if you are related in any way! Another schoolmate goes "Home" to a better life too soon! God takes the good people first so the rest of us have time to get our lives in order! Sincere sympathies to her friends and family! Carolyn (Maki) Byard and husband, Don.

Paul, what a heartfelt tribute. You are such a dear brother in the Lord. Thank you for encouraging me today with your tribute.
- Kelly Webster

CPLawson
What? About me in less than 1200 words??? OK...but first, if you do visit my blog, please leave a comment. (No profanity or derogatory statements, please!!) Considered boring by some, ultra-conservative, humorous. Try to be heavenly minded, born/raised in the Midwest, moved to CA in high school, came to true salvation there, moved to MI in 2002, then became a Texan in 2006.